Eesti Gaas and Paikre OÜ opened Estonia’s largest solar power park complex on the territory of the former Rääma landfill. The annual capacity of the power plant equals the amount of electricity which could be generated by cutting and burning three hectares of forest. 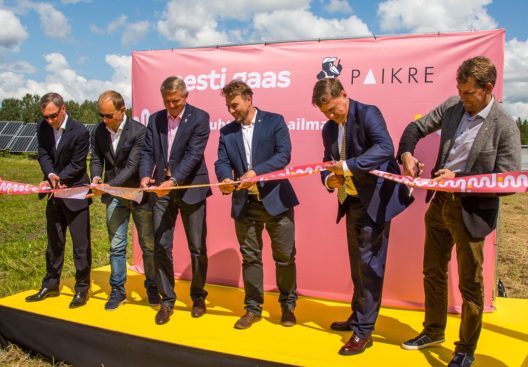 At the opening ceremony, Ain Hanschmidt, chairman of the supervisory board of Eesti Gaas and chairman of the management board of AS Infortar, said that starting the production of solar power was a major step for the company in the development of its green energy line. “Eesti Gaas has changed a lot in recent years and has been actively exploring new areas: we have considerably expanded the network of CNG filling stations, made investments into increasing our LNG competence and building a bunkering vessel. The opening of solar power plants is the next step for offering our clients a diversified range of products and for continuing our environmentally friendly direction of business,” Ain Hanschmidt said.

Margus Kaasiku, member of the management board of Eesti Gaas, said that the annual capacity of the Estonia’s largest solar plant in Pärnu, which has just been connected to the power network and has already started generating electricity for the clients, can reach four million kilowatt-hours. “This is the most advanced solar power complex in Estonia, its total capacity sufficient to cater for the annual electricity consumption needs of more than a thousand households. For comparison, the same amount of electricity could be generated by cutting and burning three hectares of forest per year,” Margus Kaasik emphasised. “The energy generated by the solar power plant is transmitted to the general electricity network, and all our clients will be able to purchase it from now on.”

According to Kristo Rossman, member of the board of Paikre OÜ, the solar power plant was opened after nearly a year of preparation and construction involving a broad range of experts and best practices. “Solutions for the generation of green energy do not belong to a distant future anymore; in fact, they have become an inevitable present-day reality, investing in which is both reasonable and necessary. The potential of renewable energy solutions is immense, and the accompanying effect on the environment of as well as new economy models is remarkable. As a company with substantial experience in waste handling, Paikre OÜ aims to continue developing green energy and circular economy solutions,” Kristo Rossman commented on the firm’s development plans.

The power station situated in Paikre OÜ’s  16-hectare area houses four 990-kilowatt solar parks comprising 13,000 solar panels. The solar parks are located in the territory of the former Rääma landfill, which ceased operation and was recultivated, to give a new life and purpose to a previously wasted plot of land.