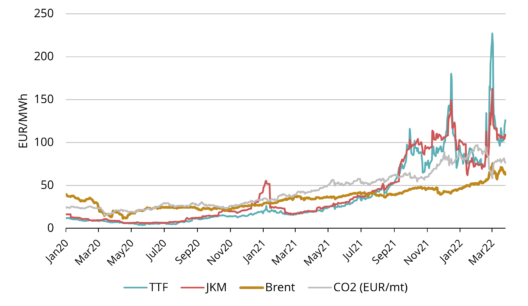 In Q1 2022, the average European natural gas benchmark TTF price was 92.61 EUR/MWh, a 4x increase over the same quarter the year before. The April 2022 TTF price has settled at 129.094 EUR/MWh and the TTF forward price for the nearest month May 2022 was trading at around 126 EUR/MWh on the last day Q1. The forward curve is generally declining meaning the further months are priced slightly cheaper than nearby months, but high prices are prevalent in the forward prices at above 110 EUR/MWh until the end of next winter.

After the steep drop in the end of 2021, gas prices were mostly fluctuating in what can these days be considered a relatively stable range between 70 and 100 EUR/MWh in January and most of February. When the Russian invasion in Ukraine started on 24 February, prices started to climb quickly and peaked on 7 March at an intraday price of 345 EUR/MWh.

Normally Europe gets about 40% of its natural gas from Russia. This has made Europe exceedingly energy dependant. As the war in Ukraine started and the West established a unified front with sanctions towards Russia, gas market participants evaluated the effects and quickly realised that diversifying away from Russia would be a costly and time-consuming endeavour, and the price followed suit higher in the initial panic in the first weeks of the war. This culminated on 7 March when Russia commented on the possibility of cutting gas supply to Europe as a countersanction. Around the same time the United States banned the import of Russian energy, but it was quickly made clear that the European Union will not be extending the ban to energy. The market combined this reassurance with the belief that Russia would also not be incentivised to cut from their side because the income from energy is one of the few remaining sources of foreign hard currency, and the prices started to draw back towards the 100 EUR/MWh level.

Russian flows have been stable 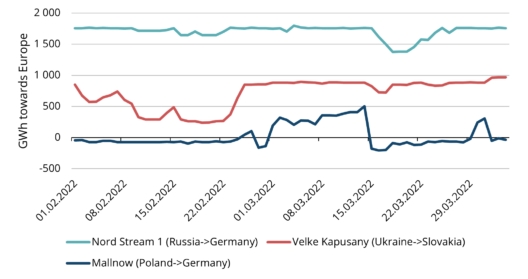 Despite the fears of gas from Russia being cut off from either side, flows have even increased since the start of the war and remained steady since. Figure 2 below shows the three main pipeline routes. The underseas Nord Stream 1 directly from Russia has been steady and operating at basically full capacity. Exactly since the start of the war, flows from the Velke Kapusany point on the Ukraine-Slovakia border have increased. The Mallnow point between Germany and Poland is currently balancing net flows from Russia, flowing at times towards Germany and at times towards Poland. When this is negative, meaning flowing towards Poland, it does not mean Russia is not supplying gas to Europe, it just means that due to relatively lower consumption in Germany on those days and relatively higher in Poland, more gas stays in Poland. The increase of combined flows at the start of the war is mostly connected to, on the one hand, buyers wanting to secure as much supply as possible before a possible cut-off, and, on the other hand,  the supply fears pushing the forward price curve higher due to uncertainty and making February and March prices look relatively cheaper. The below graph also includes the first days of April, which display that despite Russia’s threats of only allowing payments in rouble from the beginning of April, which Europe has largely said they wont comply to, flows are still ongoing as normal. 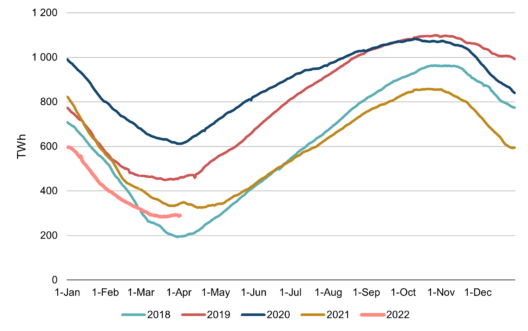 Physical gas fundamentals outside the political risk are not poor. Due to the supply fears and relatively more expensive forward curve, market participants in Europe have been filling inventories as much as possible throughout March. This has resulted in some normalisation of seasonal storage levels. Furthermore, LNG flows into Europe have been at historically high levels in Q1 2022. The European benchmark TTF price is currently trading higher than the Asian benchmark JKM (see figure 1 above), attracting more LNG cargoes towards Europe. Still, LNG terminals are running at close to full capacity and redirecting supply flows rapidly is no easy task.

Already various steps are taken to reduce energy dependence on Russia. The European Union has proposed legislation to require storage capacity owners to fill at least 80% of their storages by 1 November to ensure security of supply for the upcoming winter. Member states are extending phase-out of nuclear and fossil fuel power plants further than their planned decommissioning dates. Governments, including those in the Baltics and Finland, are working with the private sector to increase LNG import capacities, because the main bottleneck in terms of LNG supply is not the liquefied gas itself but rather the LNG terminals, border connection points and other infrastructure to receive and transport the gas from new sources.

EU’s ambitious target is to reduce the annual natural gas import from Russia by about two thirds this year, by 100 billion cubic metres. BNEF (Bloomberg New Energy Finance) has analysed that half of that reduction is to come from diversifying to LNG, a quarter from increased wind and solar energy production, about 15% from behavioural energy saving and the rest from pipeline supply diversification, biomethane production and other sources.

This market overview is for informational purposes only. We aim to compile the most relevant data from various sources in good faith but the analysis should not be treated as an advice or taken as the sole basis for any action.