This week, PAO NOVATEK officially opened the LNG plant Kriogaz-Vysotsk in Vysotsk on the shore of the Gulf of Finland. Experts from Eesti Gaas were involved in the pre-commissioning process. 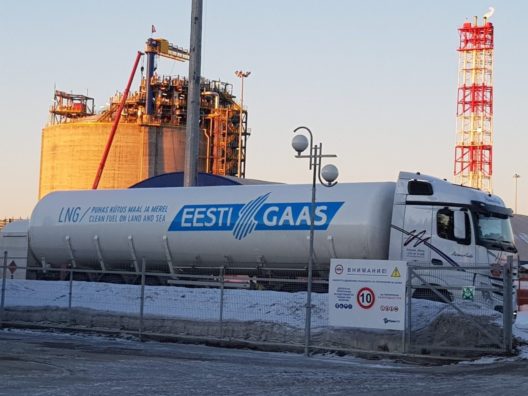 “The commissioning of this plant demonstrates the capabilities of Eesti Gaas in the LNG sphere. The competence of our team specialising in LNG and our technical facilities allowed us to perform the tasks we had assumed within the established timeframe,” said Kalev Reiljan, member of the board of Eesti Gaas.

The contribution of Eesti Gaas to the commissioning of the Vysotsk plant primarily comprised participation in the process of subcooling a tank 42,000 cubic metres in volume to the temperature of -155 °С and supplying the LNG necessary for the operation.

Eesti Gaas delivered the LNG to Vysotsk from Finland in special-purpose containers. The LNG was pumped under the guidance and supervision of the company’s specialists. The preparation took three months, and round-the-clock subcooling and maintenance of the design temperature reached before the commissioning of the production line required two more weeks.

“We hope our cooperation with the plant in Vysotsk will be a long-term one. As Eesti Gaas is planning to start bunkering ships in Finland, too, in addition to the port of Tallinn, we are interested in LNG from Vysotsk and prepared to transport it to Helsinki and other ports in Finland at competitive prices,” Reiljan said.

Eesti Gaas supplies its clients with LNG from Russia, Finland and Lithuania. Last year, the company delivered a total of 16,000 tonnes of LNG from these procurement sources while the supply amount had been 12,300 tonnes a year earlier. Eesti Gaas transports LNG and performs bunkering by means of eight trailer trucks purchased by the company specifically for this purpose.

The design annual capacity of the LNG plant opened by PAO NOVATEK in Vysotsk (Vyborgsky District of Leningrad Oblast, Russia) can reach 660,000 tonnes. The second phase of the plant construction is to result in facilities of the annual capacity over 1.1 million tonnes, after which the production capacity will increase to approximately 1.8 million tonnes annually.

LNG (liquefied natural gas) is a clear, colourless and odourless liquid produced by means of cooling down natural gas to approximately -160 degrees. LNG is essentially a form of transporting natural gas. In the process of liquefication, the volume of the gas is reduced to 1/600th compared to its gaseous state, which allows natural gas to be delivered to sites and areas which are not connected to gas pipelines.  LNG is an environmentally friendly fuel which allows the content of carbon dioxide and NOx in emissions to be reduced remarkably and produces almost no soot particles or carbon monoxide emissions.