According to a study presented at the annual gas market conference, a car running on Estonian green gas compensates for the environmental damage of one equivalent petrol or diesel vehicle, with the most positive effect on nature being on green gas produced from manure. 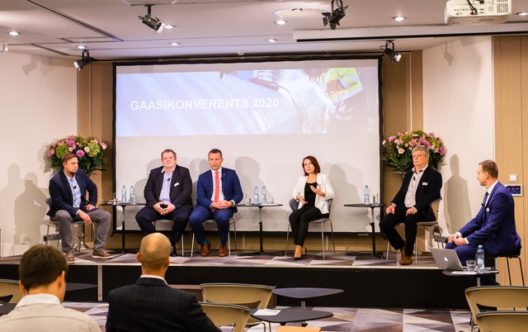 The annual conference organized by the Estonian Gas Association discussed the future of gas fuels in the transport sector and in overall energy consumption, looking for realistic alternatives and new uses for natural gas. The Minister of Economic Affairs and Infrastructure Taavi Aas, who made the opening speech, emphasized that natural gas is an intermediate link between today’s and the new generation of fuels, but that opportunities for gas greening must be sought today, including with biomethane and hydrogen.

Alo Allik, a researcher at the Estonian University of Life Sciences, who introduced the study of the environmental impact of fuels at the conference, stated that biomethane, unlike other fuels, has a positive environmental impact. “It is true that both natural gas and the compressed gas produced from it are among the most environmentally friendly fuels for cars, but if we look for a replacement in the next decade, the most serious choice is biomethane. The study shows that a car running on biomethane neutralizes the environmental footprint of a car with a diesel or petrol engine, provided that manure is used to produce biomethane, ”said Allik.

In his presentation, Ants Noot, Chairman of the Management Board Eesti Gaas and the Estonian Gas Association, gave examples of how Estonian companies have already adapted to the tightened climate policy and are looking for new markets and energy sources. “On the example of Eesti Gaas, I can say that in four years we have essentially transformed a natural gas supplier into an international energy company with a diverse renewable energy portfolio. We have successfully entered the natural gas markets of neighboring countries, but have taken a clear direction in the supply of green gas, LNG and solar energy, “said Ants Noot. “I also see green gas as a player in the district heating.”

However, Alan Vaht, a member of the board of Alexela, pointed out that we cannot ignore the fact that transport is the biggest climate problem globally and the only alternative to long-distance transport is LNG and biomethane in vehicles. “It is clear that in an increasingly severe climate crisis, LNG and biomethane must be used for long-distance transport. The latter is today the only climate-neutral transport fuel and also an opportunity to switch to a cattle in the future, “said Alan Vaht.

The conference culminated in a panel discussion in which representatives of major parties discussed what steps can and should be taken by the state, local governments and also producers-consumers to ensure a cleaner environment and what are the realistic substitutes for natural gas. According to Keit Pentus-Rosimannus, biogas is an important way to reduce emissions right away, as an intermediate option before the introduction of hydrogen. According to Erki Savisaar, the transition to hydrogen will save the environment immediately, and according to Lauri Läänemets, Estonia needs the support and guidance of the state to implement the changes, and stricter taxation of fossil fuels is an important impetus for a cleaner environment. Keit Pentus-Rosimannus, Siim Kiisler, Erki Savisaar, Robert Kiviselg, Lauri Läänemets participated in the discussion.

The annual gas market conference took place on October 12 and was organized by the Estonian Gas Association, Eesti Gaas and Alexela. The conference was part of the Blue Corridor Rally – 2020 movement, which started in Orenburg and ends in Berlin in November.