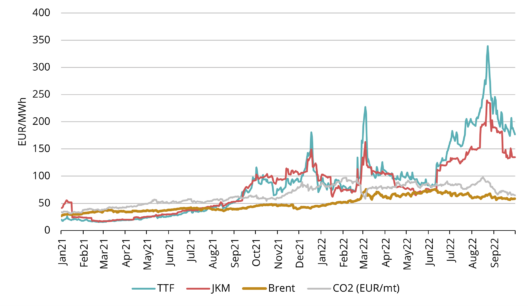 In Q3 2022, the average European natural gas benchmark TTF price was 171.13 EUR/MWh, a 368% increase over the same quarter the year before. The October 2022 TTF price has settled at 202.58 EUR/MWh and the TTF forward price for the nearest month November 2022 reached 188.80 EUR/MWh on the last day of Q3. On the forward curve, 2023 is priced only slightly lower at around 183 EUR/MWh. Compared to the end of Q2, the biggest increase on the curve has been from April 2023 – March 2024, as markets have priced in a longer crisis period extending further from just the upcoming winter.

Q3 started with a strong rise in prices, with the front-month TTF contract reaching even above 340 EUR/MWh in late August, as supply situation continued to deteriorate. In September, prices have been declining mainly due to strong storage levels and a lower demand outlook. 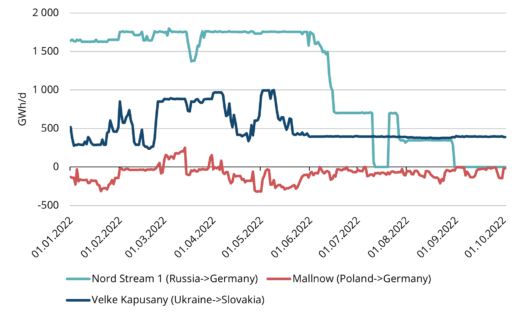 In mid-July the market participants were in anticipation of whether Nord Stream 1 would come back online after 10 days of scheduled maintenance. Even though flows did recover briefly they resumed reduction in late July. After another 3-day planned maintenance in the beginning of September, however, the flows did not return. Gazprom itself cited turbine malfunctions and the key pipeline has thus remained completely shut indefinitely from 2 September.

Further distress was created when unexplained leaks were found in late September in both Nord Stream pipelines. Seismologists identified underwater blasts at the pipeline sites. Even though this event does not directly impact ongoing flows anymore which had been reduced to zero already earlier, it reduces hopes of the re-emergence of flows and heightens the supply concerns.

Of the other two main pipelines from Russia to Western Europe, Russian supplies to Poland have been closed off since spring so the Mallnow point is mostly flowing in the opposite direction from Germany towards Poland. The only remaining source of pipeline natural gas to Western Europe is to Slovakia via the Ukrainian pipeline. This flow remains stable but amounts to around 400 GWh per day, only about 10% of the 3,500 GWh/d capacity which was flowing from Russia towards Europe for most of 2021.

Storages in Europe have been filling at a healthy pace throughout summer thanks to ample LNG supply and urgency to stock up before winter. As of the end of Q3-22, European storages combined hold 979 TWh of gas, equivalent of about a quarter of Europe’s pre-crisis consumption. That amounts to 88% of total capacity, well ahead of the EU’s target of 80% by 1 November. High storage levels are one of the main factors contributing to somewhat declining prices over the past month.

Another factor helping bring prices somewhat lower comes from the demand side. Higher prices have led to a consumption decline of around 7% in Northwest Europe this year compared to the year earlier. However, in some countries this decline has been far deeper amounting to up to 50%. The overall macroeconomic outlook suggests a recession with Europe’s Purchasing Manager Index, indicator of business conditions on a scale from 0 to 100, staying below the 50 level throughout Q3.

This market overview is for informational purposes only. We aim to compile the most relevant data from various sources in good faith but the analysis should not be treated as an advice or taken as the sole basis for any action.